Clight is a tool that uses your computer’s webcam or ambient light sensors to get the ambient brightness, and then calculates and sets the screen backlight accordingly.

The tool works on X11, Wayland and tty, although on Wayland, some protocols need to be implemented by your compositor for this to work.

Clight itself is a daemon (written in C), so it doesn’t have a graphical user interface, however, there’s a cool third-party Qt 5/6 GUI that you can use, which allows configuring Clight, which comes with a tray applet: 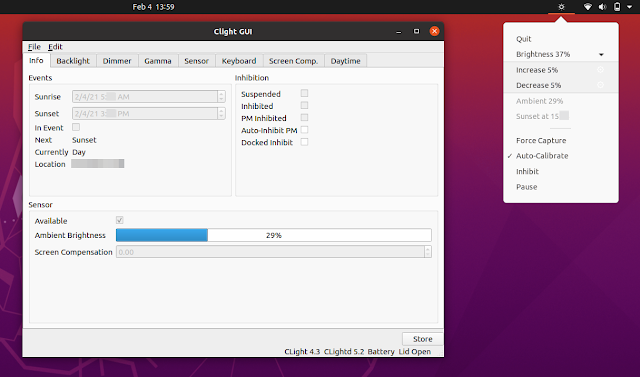 It’s important to note that Clight is lightweight, and it aims to be very power friendly, only using CPU when needed. So it shouldn’t drain your laptop’s battery. It won’t use the camera all the time, but only when it’s needed, with longer timeouts while on battery.

The only downside to Clight? You need to build not only Clight and Clightd from source, but also 2 dependencies (libmodule and ddcutil), as well as the Clight-GUI if you want to use it. That is, unless you use Arch Linux / Manjaro (there are AUR packages available), NixOS, Exherbo or Void Linux, for which there are packages available.

On the Clight wiki you’ll find the required dependencies (well, some of them), along with commands to install these on Debian / Ubuntu / Linux Mint / Pop!_OS and Fedora.

You’ll also need to make sure you have git installed to pull the repositories from GitHub. You may also install (optional) libgeoclue-2-dev to automatically retrieve user location for sunset / sunlight times.

For Clight-GUI you’ll also need to install libqt5charts5-dev on Debian / Ubuntu. Also, on my Ubuntu 20.04 desktop, Clight-GUI failed to build (it didn’t on Ubuntu 20.10), getting an error saying “DBusSingle.h:20 Error: Not a signal or slot declaration”. I fixed this by opening clight-gui/src/dbus/DBusSingle.h, and on line 19 I removed “slots” (so it’s just “public:” now).

It’s also worth noting that to be able to see the Clight-GUI on GNOME Shell, you’ll need an extension such as AppIndicator and KStatusNotifierItem Support (this is installed by default on Ubuntu, so you don’t need to install anything).

Clight-GUI uses a dark tray icon by default so, depending on the color of your panel, you might not see it at all – fix this by setting Clight-GUI to use a light tray icon from its Tray menu (Light Tray Icon option).

Also, some recent geoclue2 versions will cause the Clight startup time to increase by up to 20 seconds.