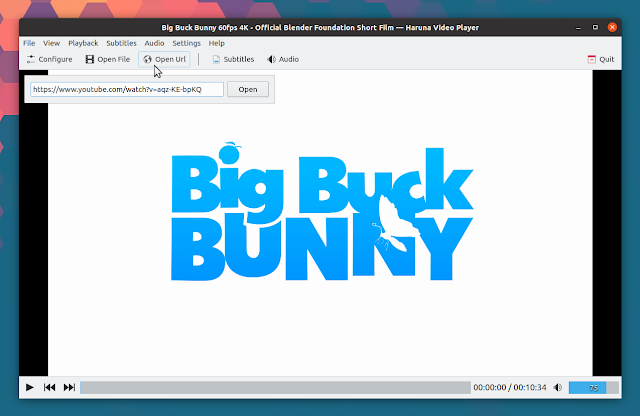 Haruna is a free and open source Qt / QML video player for Linux that makes use of mpv (libmpv) for video playback.

libmpv makes it possible to embed mpv into other programs as the video / audio playback backend. New to mpv? This is a free and open source media player based on MPlayer, mplayer2 and FFmpeg, that runs on Linux, *BSD, macOS and Microsoft Windows, and there’s also an Android port.

mpv has become quite popular in recent years thanks to features like high quality video output (using OpenGL as well as the new Vulkan API, which supports over 100 options for controlling playback quality, including the use of advanced upscaling filters, color management, etc.) with optional hardware acceleration.

It also supports youtube-dl, which allows playing online videos from over 1000 websites such as YouTube and PeerTube, it has support for Lua scripting, and it can even encode files from one format/codec to another, among others.

By default, mpv comes with a minimal graphical user interface, which is basically just an on-screen controller which offers basic mouse interaction.

Haruna Video Player is a GUI frontent for mpv (libmpv) that makes using and configuring mpv easier for those who prefer a graphical user interface. Using it, you can show the playlist on mouse-over, easily configure the keyboard shortcuts and mouse buttons, jump to the next chapter by middle click on the progress bar, and more. This mpv GUI also allows setting the preferred youtube-dl audio/video format.

Other features include the ability to load primary and secondary subtitles, set the preferred subtitle language, change the volume and seek steps, automatically skip chapters containing some words, and color adjustment.

It’s also possible to increase or decrease playback speed, and quicken or delay subtitles, among other small features. Some user interface elements, like the menubar, toolbar and chapter markers, can be shown or hidden. You can also choose the color scheme (default, or Breeze light/dark/high contrast), and if the video player should use the Breeze icon theme and a Breeze GUI style or not.

The Breeze icon / GUI options have been added in the latest Haruna 0.5.0, released recently. Also new in this version is the ability to toggle hardware decoding, and an option to set the file dialog location (if empty, the file dialog remembers the last open location).

Note for Gtk users: When installed from Flathub (I’m not sure if that’s also the case when installed in some other way as I didn’t try it), Haruna doesn’t use your system theme style or icons.

Overall, Haruna exposes enough features / settings to make mpv easier to use, while also keeping things simple and clean. It’s up to you if you want more (see SMPlayer which can also use mpv, or something that does pretty much everything like VLC) or less (use the bare mpv) from a video player and its user interface.

There are third-party Haruna packages for Arch Linux / Manjaro (AUR) and openSUSE Tumbleweed. For other Linux distributions you can either install it from source as explained here, or install it from Flathub.

If you install Haruna from Flathub, it comes with everything you need to run it bundled. That means it has libmpv and youtube-dl available directly, so it doesn’t matter what version of these packages your system has.

For installing Haruna from Flathub, you’ll need to setup Flatpak on your system if you haven’t already (and if your Linux distribution doesn’t enable it by default). See this quick setup page for how to do this.