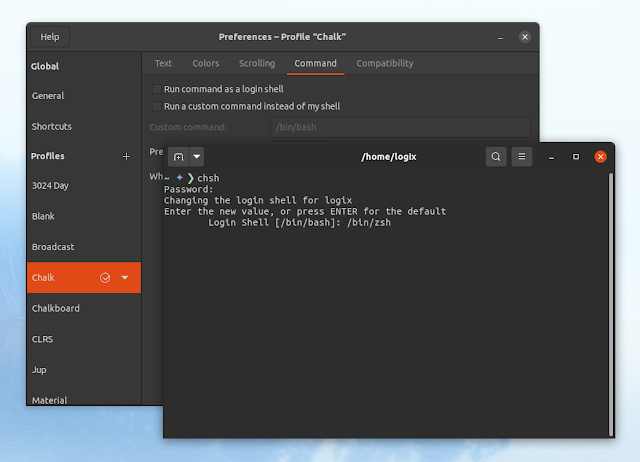 This article explains how to change the default shell in Linux. Using this you can set Bash, sh, Zsh, Csh, Fish, etc. as your shell.

The article includes instructions for changing the login shell from the command line using chsh, or changing the shell only for a particular terminal application. While the article is targeted at Linux users, this should also work on other Unix-like systems.

This program changes the login shell by modifying the /etc/passwd file and setting the $SHELL environment variable. You can override the default shell in a terminal application, by setting the shell from the terminal settings – see the second part of this article for details.

A note for Fedora users. Fedora doesn’t have chsh installed by default and to use it, you must install a package called util-linux-user. If you want to skip installing this package, you can use lchsh instead to change the login shell, which is available by default:

So before changing your shell, list all the shells listed in the /etc/shells file from your Linux system by using the following command:

If the shell you want to use is not listed here, it may not be installed on your system. So install it (for example, install Zsh on Debian / Ubuntu / Linux Mint / Pop!_OS using: sudo apt install zsh) and check again.

To change the shell for your user, run:

This runs chsh in an interactive mode, asking you for the password, then listing your current shell (most Linux distributions use Bash as the default shell) and asking you to enter a value for your new shell. Here’s the command with its output:

To change your shell, type the path to the new shell (which exists in /etc/shells) and press the Enter key.

For example, to change the shell for the current user from Bash to Zsh:

In case you’re using a chsh version that doesn’t launch with an interactive prompt after executing chsh, change the login shell for your user directly:

E.g. to change the shell to Zsh:

After changing your account’s shell, logout and re-login to use the new shell.

To change the login shell for another user or for the root user, login to the shell prompt as root using su -, sudo -i, sudo su, etc., and run:

This time we’ve used chsh with the -s option, which changes the login shell directly (doesn’t run in an interactive mode). Here, SHELL is the new shell (e.g. /bin/zsh) and USERNAME is the user for which you’re changing the shell; for example, to change the shell to /bin/zsh for the user Logix, you’d use: chsh -s /bin/zsh Logix).

Change the shell for your user in a terminal application

You can use a shell that’s different from the login shell ($SHELL) for a particular terminal application, if that application allows setting a custom shell or running a custom command instead of the default shell.

As a side note, you may also change the current shell (non-permanent change) by typing the shell command you want to use in a terminal (e.g. if you type “zsh”, you’ll switch to using Zsh for that session; exit by typing “exit”.).

Take GNOME Terminal for example (used in GNOME and Cinnamon desktops as the default terminal). Open its Preferences, click on the current active profile (usually called Default or Unnamed if you haven’t changed it or added new profiles) in the left-hand sidebar, then click on the Command tab: This is where you can set a custom shell to be used with this application only. Enable the Run a custom command instead of my shell option, then in the Custom command field enter the full path to the shell you want to use, e.g. /bin/zsh, /bin/bash, etc.

In Xfce4 Terminal, open the Preferences and on the General tab you’ll need to enable an option called Run a custom command instead of my shell, then enter the custom command below that (this being the shell you want to use with this terminal, e.g. /bin/zsh, /usr/bin/fish, etc.).

Using KDE Plasma’s Konsole, go to Settings -> Edit Current Profile, and on the General tab, change the Command field to the full path of the shell you want to use (once again, something like: /bin/zsh, /bin/bash, /usr/bin/fish, etc.).

Using Guake, you can change the user shell from its Preferences, on the Shell tab, where you’ll find an option called Default interpreter that allows choosing any shell listed in /etc/shells.

Setting this is the same in most cases, so I won’t give any more examples. However, it’s worth noting that not all terminal applications have options to allow using a custom shell — in such cases, use the chsh command to change the login shell, as explained above.

27 Ocak 2021
Facebook Twitter WhatsApp Telegram
Kapalı
Kapalı
Kayıt Ol
We use cookies to ensure that we give you the best experience on our website. If you continue to use this site we will assume that you are happy with it.Ok