This article explains how to install the Deepin Desktop Environment on Ubuntu 20.04 or 20.10, and Linux distributions based on these Ubuntu versions, like Linux Mint 20.x. You’ll also find instructions for how to remove it in case you no longer want to use it.

Deepin Desktop Environment (Deepin DE or DDE) is written in Qt and uses dde-kwin as its window manager (a set of patches for KDE Plasma’s window manager). It’s used by default in Deepin, a Linux distribution with a predominantly Chinese userbase, which ships a mix of open source and proprietary programs, including Google Chrome, Spotify, Steam and WPS Office.

There’s also a community-maintained distribution that ships with DDE by default: UbuntuDDE (there was also Manjaro Deepin, but that’s no longer available). In fact, if you want to use the Deepin Desktop Environment on top of Ubuntu, the best solution is to use UbuntuDDE, an unofficial Ubuntu remix with DDE by default. It had its first release as UbuntuDDE Remix 20.04, based on Ubuntu 20.04 LTS Focal Fossa, and there’s also a 20.10 release that features DDE from Deepin v20.

If, however, you want to install Deepin Desktop Environment on top of an existing installation of Ubuntu 20.04 or 20.10, and Linux distributions based on it (Linux Mint 20.x, Pop!_OS, etc.), use the instructions below.

It’s worth noting that the packages in the UbuntuDDE Stable Release PPA are older for Ubuntu 20.04 and Linux Mint 20.x than for Ubuntu 20.10 (it’s a mix of versions, see here). On Ubuntu 20.04, the file manager, settings and dock look like this by default: 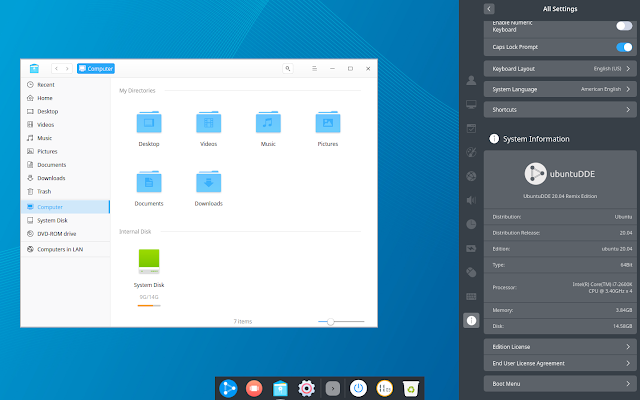 While on Ubuntu 20.10, which uses Deepin Desktop Environment from Deepin v20, they look like this by default: [[Tip]] The file manager may show a large list of mounted volumes on Ubuntu. You can hide that from the DDE File Manager Settings - > Other -> Hide system disk.

From my tests, I can tell you that Deepin Desktop Environment needs about 2.2 GB of space to install the packages, with an extra 600 MB for the downloaded archives (DEB packages). This is not exact, as it depends on how many packages you already have installed from the DDE dependencies.

Follow the steps below to install Deepin Desktop Environment on Ubuntu 20.04 / Linux Mint 20.x or Ubuntu 20.10.

Next, for Ubuntu 20.04 or Linux Mint 20.x, install the Deepin Desktop Environment using:

For Ubuntu 20.10, install Deepin Desktop Environment using this command instead:

It’s important to save the list of new packages that are installed by using the sudo apt install... command. By saving this list, you’ll be able to completely remove the Deepin Desktop Environment later, in case you no longer want to use it. So when running the sudo apt install command, don’t press Enter immediately (or scroll up). Instead, select and copy the package list from under “The following NEW packages will be installed:”, and save it to a text file.

3. Choose LightDM as the display manager

If you don’t already use LightDM (e.g. if you use Ubuntu with the Gnome desktop, you’re using GDM3, and not LightDM; on the other hand, Linux Mint uses LightDM by default), you’ll see a screen during the ubuntudde-desktop installation which asks you to choose a display manager – choose lightdm to use the DDE lock and login screen.

Note that on Linux Mint, you’ll continue to use the old login screen, I guess the DDE login / lock screen theme can’t be applied automatically in this case.

Once all the packages are installed, you’ll need to reboot the system. On the login screen, choose Deepin from the desktop environment list (it might already be selected by default), e.g.: 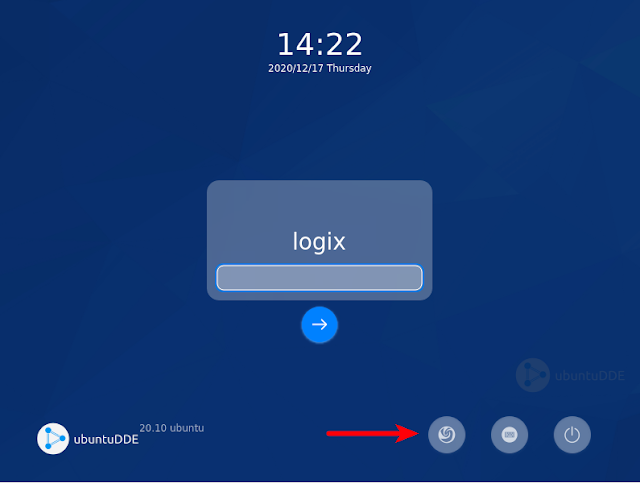 How to remove Deepin Desktop Environment

So you want to completely remove Deepin Desktop Environment from your Ubuntu or Linux Mint system? Follow the steps below.

1. Revert GRUB to its default theme

In case you forget to do this, and you no longer have Deepin Desktop Environment installed, you can still do it by editing /etc/default/grub as root (e.g.: sudo nano /etc/default/grub), and commenting out GRUB_BACKGROUND and GRUB_THEME. When you’re done, update GRUB using sudo update-grub.

2. If you didn’t use LightDM before installing DDE, switch back to your previous display manager (e.g. GDM3 if were using Gnome).

To change the display manager, run this command:

3. Remove all the packages installed by the ubuntudde-desktop metapackage and DDE dependencies.

In step 2 from the DDE installation instructions from above, I was telling you to save a list of all the new packages installed when running the sudo apt install ubuntudde-desktop command. Now it’s time to use that package list. You’ll need to remove all those packages (e.g. using “sudo apt remove ...“).

Now you can purge the PPA using:

It’s important to use -d focal on Linux Mint, or else the ppa-purge command will want to remove some important packages, like the Cinnamon desktop. So make sure you use the correct command if you use Linux Mint.

DDE is no longer installed on your system, so you can log in to the session you were using previously.

In case you removed the Deepin Desktop Environment while being logged in to it, and the reboot button no longer works, reboot by typing sudo reboot in the terminal.