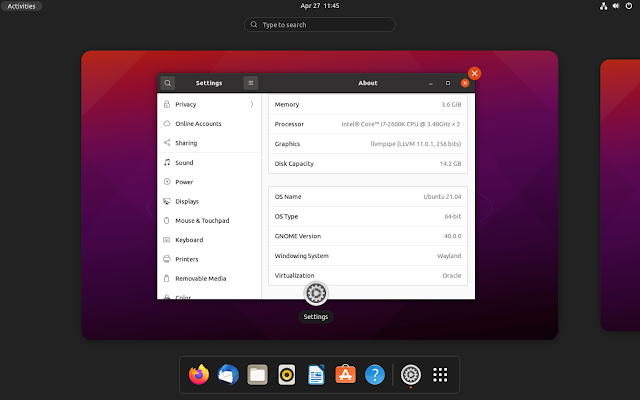 This article explains how to install GNOME 40 on Ubuntu 21.04 (Hirsute Hippo) for testing purposes, using a third-party PPA.

GNOME 40 includes a new Activities Overview design with workspaces arranged horizontally and Dash at the bottom of the screen, updates to the GNOME apps, and much more, which you can read here. Ubuntu 21.04, which was released recently, continues to use GNOME 3.38, so you’ll have to wait another 6 months to get GNOME 40 on Ubuntu, unless you use something like the PPA mentioned in this article.

It’s very important to note that the PPA is neither official nor stable. It should only be used for testing purposes. Below you’ll find instructions for reverting the changes and purging the PPA, but that doesn’t always work properly!

For example, I had this PPA for a few days, and this morning when trying to purge it, it wanted to remove half the GNOME packages installed on my Ubuntu 21.04 desktop. I was able to fix this, but if you don’t know how to do this, you’ll end up with a broken desktop.

Many of the PPA packages were updated recently (up until a couple of days ago it didn’t have the stable version of GNOME Shell, etc.), and right now the PPA can be purged correctly, but that may change in the future.

Also, some i386 packages have failed to build in the PPA, and if you have those packages installed on your system, you’ll need to remove them to be able to properly upgrade all the packages from the PPA. So you need to know your way around APT to be able to use this PPA in such cases. For me, this happened with a desktop that was upgraded from older Ubuntu versions, and not a fresh Ubuntu 21.04 installation. But still, be aware!

The PPA description also mentions that “This PPA is just for testing. It sometimes breaks, especially when I’m upgrading the packages”.

You have been warned!

Besides what I’ve already mentioned, you should also know that:

Below you can find a few more screenshots featuring GNOME 40 running on Ubuntu 21.04 Hirsute Hippo (using both the Yaru and GNOME sessions – more details about those in the instructions below): All screenshots are taken under the Yaru session (requires building the Yaru GNOME 40 branch, see below), except for the last 2, which use the GNOME session (using Adwaita theme).

How to upgrade to GNOME 40 on Ubuntu 21.04 (Hirsute Hippo) for testing purposes

2. Upgrade to GNOME 40 by installing all available updates.

The Ubuntu Dock extension will be removed when upgrading. That’s ok, it’s supposed to be removed because it doesn’t yet work with GNOME 40. But make sure other packages are not removed, and that you don’t have any held packages.

3. Use the GNOME or Yaru sessions.

Yaru, the default Ubuntu theme, doesn’t yet support GNOME 40, at least not the version available in the Ubuntu 21.04 repositories. So you have 2 options:

From below, only choose one of the 2 available options (a and b).

a) Install the GNOME session (with Adwaita theme).

b) Install the GNOME 40 branch of Yaru theme.

Start by installing the packages required to get (from Git), build and install Yaru theme:

Now you can get Yaru from Git, switch to the gnome-shell-40 branch, build and install the theme:

4. Reboot and choose the correct session from the login screen. After rebooting, when you get to the login screen, click on your username. Next, click the gear icon in the bottom right-hand side of the screen, and choose the session to which you want to login:

Don’t use the Ubuntu option from the login screen, because it continues to use the old Yaru theme (I’m not sure how).

How to undo the changes by purging the PPA

So you want to undo the changes and purge the PPA? This can be done using PPA Purge, a tool that attempts to downgrade all packages installed from a PPA that are available in the repositories. You can install PPA Purge using:

Once you have ppa-purge, you can purge the PPA using:

Zellij Is A New Terminal Multiplexer Written In Rust

Oh My Git! Is An Open Source Game For Learning Git