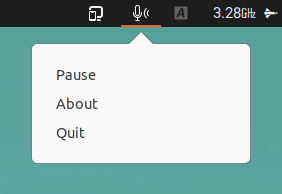 Hushboard is a new Linux program to automatically mute the microphone while typing (and unmute it when typing stops).

Its developer describes it best:

Never listen to the thundering sounds of someone typing on a video call ever again! Well, nobody who talks to you will have to listen to it. If you don’t want to listen to it either, encourage your friends and colleagues to install Hushboard. While you’re typing, your mic is muted. When you stop, it unmutes again. That’s it.

The PyGTK3 application sits in the tray, waiting for you to type, and as soon as you start typing it mutes your microphone. The Hushboard microphone icon displayed as a tray/appindicator changes depending on your microphone state: enabled or muted. The tray also allows you to pause Hushboard and quit the application.

The small program is only 3 weeks old, and its description says this is “an app for Ubuntu“, but it should work on other Linux distributions as well, as long as PulseAudio is used. In fact, the application is currently packaged for Arch Linux (AUR) and as a Snap package (which is supported across many Linux distributions).

Note that to see the Hushboard tray icon when using the Gnome desktop, you must have an extension installed that provides this, like the AppIndicator and KStatusNotifierItem Support extension (this is installed by default on Ubuntu, there’s no need to install anything else).

If you want to read more, I’m sorry to tell you but that’s all I’ve got 😁️ The application is very simple, with zero configuration, and does what it’s supposed to in an efficient and elegant way.

You might also like: How To Enable Echo / Noise Cancellation Of Microphone Input On Your Linux Desktop (PulseAudio)

Hushboard is available on the Snap Store, which is available for many Linux distributions. Arch Linux / Manjaro users also have the possibility of installing it from AUR. Alternatively, you can run / install the application from source, as explained here.

You might like: Pause Music When Locking The Screen And Resume On Unlock For Spotify, Rhythmbox, Others

3 Şubat 2021
Facebook Twitter WhatsApp Telegram
Kapalı
Kapalı
Kayıt Ol
We use cookies to ensure that we give you the best experience on our website. If you continue to use this site we will assume that you are happy with it.Ok