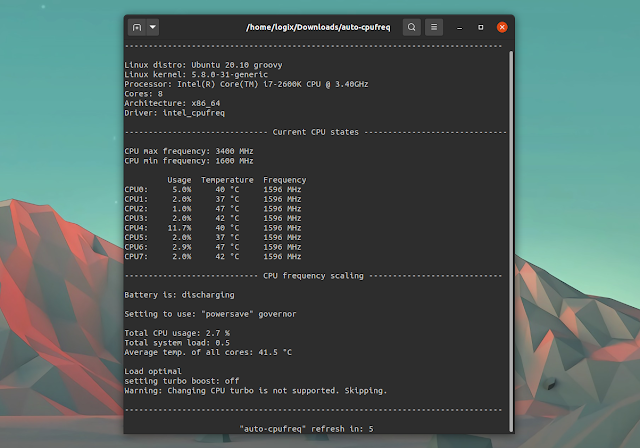 auto-cpufreq, an automatic CPU speed and power optimization tool for Linux has been updated to version 1.5.0 (and then to 1.5.1 to fix some issues) with changes among which there’s an important new feature: a mechanism to enable turbo boost based on the CPU temperature in combination with CPU utilization/load, in order to prevent overheating.

You can read more about auto-cpufreq in the article I’ve covered on Linux Uprising, and on the application project page.

By the way, auto-cpufreq doesn’t interfere with TLP, so you can have both installed at the same time.

Until this release, there were some cases in which a laptop using auto-cpufreq could overheat due to turbo boost being turned on. This wasn’t a bug in auto-cpufreq directly, as turbo was only enabled when it was needed (e.g. when the laptop was plugged-in and the system load was high), but even so, it shouldn’t happen any more thanks to a new feature.

auto-cpufreq 1.5.0 (with an important fix for this in version 1.5.1, released only a few hours later) adds a mechanism to enable turbo based on the CPU temperature in combination with the CPU utilization and load, in order to prevent overheating. With this, turbo boost is only enabled if the CPU utilization / load is high and the average core temperature isn’t high. This should be especially useful for poorly ventilated laptops that tend to overheat.