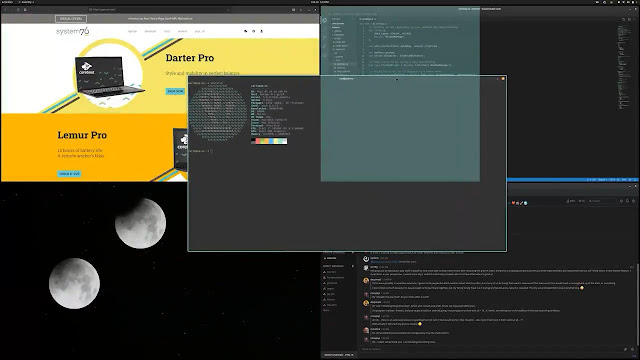 Pop Shell, the GNOME Shell extension for window tiling used by default in Pop!_OS 20.04 and newer, has recently been updated with improved support for mouse-based window tiling.

With auto tiling enabled, you’ll now be able to see where you can place a window, while dragging it using your mouse. You can even create window stacks using the mouse now.

You can preview this feature in a tweet by System76 (credits for the image at the top of this page are also for System76):

While it can now be used easily with a mouse, Pop Shell continues to offer powerful keyboard shortcuts which you can see below (screenshot generated by compiling shell-shortcuts as of today, it’s subject to change): The commit that adds improved support for mouse-based tiling is already available for Pop!_OS 20.04 and 20.10 users, as it’s been published to the Pop!_OS PPA yesterday.

Since the last Pop Shell stable release (1.2.0), this tiling GNOME Shell extension has received various other improvements, like the ability to control the Pop Shell features from the launcher (Super + /; like toggle window titles, toggle stacking, etc.), a script to suspend the system from the launcher, and support for numpad keys in the default keybindings, along with some fixes.

You may also want to read about Pop Shell’s window stacking feature.

Pop Shell is only available by default in Pop!_OS, however, it can be used on any Linux distribution with GNOME Shell 3.36 or 3.38. You can find instructions for installing it on Ubuntu, Debian, Fedora, etc., as well as more information about Pop Shell, on Linux Uprising. Note that to get the latest features, you’ll need to install the latest Pop Shell from git.