Quite a few applications were updated recently, and this article covers the changes in these new releases. There’s also a brand-new GNOME Shell extension for multi-touch gestures on X11. Read on to find out more!

X11 Gestures is a brand-new GNOME Shell extension for multi-touch gestures on X11, created by the Touchegg developer. The extension requires having Touchegg installed (this is an application that runs in the background and transforms touchpad or touchscreen gestures into actions for your desktop).

This extension enables 1:1 gestures that are available on GNOME in the Wayland session, to those using the X11 session. It requires GNOME 3.36 or newer but, according to the developer, it’s GNOME 40 where it really shines.

You can see the extension developer using this in the video below:

Ventoy 1.0.36 (Create multiboot USB devices with Linux and Windows by simply copying the ISO to the USB) 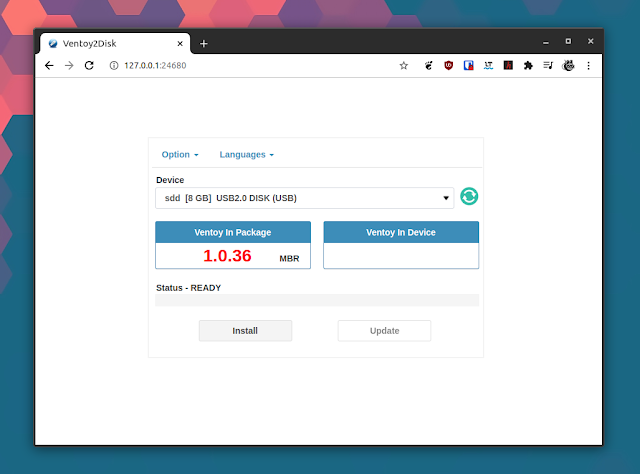 For Arch Linux / Manjaro, you can find Ventoy in the AUR. For other Linux distributions, download the .tar.gz from the releases page, extract and run it from a terminal (see link below for more details).

Also see: Create A Bootable USB Drive By Simply Copying The ISO To The USB With Ventoy (Linux And Windows) – includes complete instructions for using Ventoy, including how to create a bootable USB drive with persistence.

Clight 4.3 (Tool that uses the webcam to adjust screen backlight based on ambient brightness)

Clight is a tool that uses your computer’s webcam or ambient light sensors to get the ambient brightness, and then calculates and sets the screen backlight accordingly.

The tool works on X11, Wayland and tty, although on Wayland, some protocols need to be implemented by your compositor for this to work.

Clight is a daemon, and doesn’t have a GUI, but there’s a third-party GUI tool you can use to configure it.

To use Clight, you’ll need to build it from source on most Linux distributions. On Arch Linux / Manjaro you can install clight as well as the third-party Clight GUI from AUR.

Flameshot is a screenshot tool with drawing / annotation capabilities, available for Linux ,Windows, and macOS with this release. On Linux it supports X11, and has experimental Wayland support for Gnome and Plasma. For Linux, you’ll find Flameshot binaries for Debian / Ubuntu (DEB) and Linux distributions based on these, Fedora (RPMs specifically built for it), as well as a generic AppImage that you can use on any Linux distribution (make the AppImage executable and double click it to run it).

Flameshot is also available in the repositories of many Linux distributions, but it hasn’t yet been updated to the latest release in most cases (it’s already version 0.9 for Arch Linux).

The application is also available as a snap package, on the Snap Store, and as a flatpak package, on Flathub (not yet updated to version 0.9). You can use these packages on most Linux distributions. SimpleNote is a note-taking application with optional Markdown support. There are applications for desktops (Linux, Windows and macOS), iOS and Android, and there’s also a web client. The Simplenote applications are free and open source software, but the server is not (though there’s no cost in using it to sync notes).

Originally created by Simperium back in 2008, Simplenote is developed by Automattic, the company behind WordPress.com, Akismet, etc., since 2013.

The application is also available as a snap package, on the Snap Store, and as a flatpak package, on Flathub. You can use these packages on most Linux distributions. Quod Libet is a music player and manager that offers several ways to view the music FlathubFlathubFlathublibrary. It includes support for Internet radio, audio feeds, as well as a flexible metadata tag editor. It’s available for Linux, Microsoft Windows and macOS.

There are many more changes in the latest Quod Libre 4.4.0. See the complete changelog for details.

For a somewhat similar music player, also check out gmusicbrowser, which had is first release in more than 5 years back in November 2020. Or, for a cloud-based music player with YouTube support and over 25000 online radio stations, see Olivia.

On Linux, the application is available in the repositories for several Linux distributions, including Debian / Ubuntu, Arch Linux / Manjaro, Fedora, openSUSE, etc. However, these distro-provided packages have not yet been updated to the latest 4.4.0 version (not even on Arch Linux) at the time I’m writing this article.

Quod Libet is also available on Flathub, making it available for easy installation on most Linux distributions. This package has already been updated to Quod Libet 4.4.0.